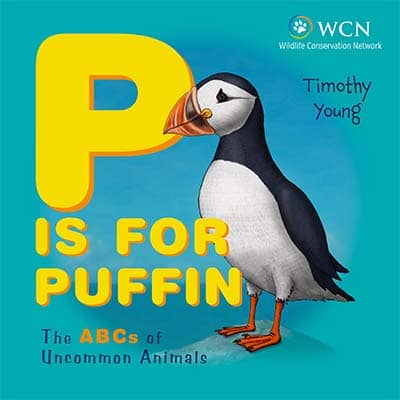 Maryland author-illustrator Timothy Young is a long-time friend of the Gaithersburg Book Festival, and the creator of many wonderful children’s books, including his newest, P is for Puffin: The ABCs of Uncommon Animals, a delightful nonfiction board book for children of all ages.

Timothy seems to love the beautiful Atlantic Puffin which nests in the North Atlantic. In the summer, birdwatchers “flock” to Maine and eastern Canada to catch a glimpse of them.

Fans of Timothy’s picture books will remember that in 2014 he published the children’s book, The Angry Little Puffin, about a Penguin – er – Puffin with lots of feelings. Four years later, in 2018, he published If You Give the Puffin a Muffin, about the same grumpy Puffin who realizes that he’s the subject of another picture book and the target of a rhyming scheme gone wrong.

Timothy will be presenting P Is for Puffin: The ABCs of Uncommon Animals along with June Smalls (He Leads: Mountain Gorilla, The Gentle Giant )  11:15-12:05 in the Jim Henson Pavilion (immediately followed by a book signing).

He will also lead an illustration workshop for teens entitled Drawing Animals: Either Realistic or Funny 2:00-2:45 pm in the Children’s Village Workshop Tent.

I hope you enjoy my interview with author-illustrator Timothy Young.

I have a great workspace in my home. I moved into a larger room in the house in January 2021 so I could have room to set it up so that half of it is a presentation space for virtual visits. I have so many lights it’s like working in a TV studio! I also have lots of books and toys and other stuff, things I have worked on and things that I just like having around. I also have my drawing table on one end near the front window and a reclining chair by the back window where I can relax, think and read.

How (or in what ways) do you hope librarians will promote your new book (or any of your books)?

While it is a board book I would hope that the illustrations and animal facts would appeal to older children who are interested in animals.

Can you tell me about your research process for P is for Puffin?

I have been interested in animals since I was very young. I still have a set of animal cards that my mom signed me up for. I received a new set of cards each month for many years. Many of the animals in the book I already knew about. In picking specific animals for each letter I learned about some animals I had not heard of before like the Shekru and the Fairy Armadillo. I read everything I could find about each animal and picked some interesting facts about each.

Who is the reader you are writing for?  Please describe them.

As with most of my books my first audience is me. I write books that I would have liked reading as a child. I hope that there are kids out there who love to learn about new animals and it sparks their curiosity further.

What is one (or more) thing(s) that you really want your readers to know about you?

This book began as another vehicle for my Angry Puffin but as I worked on it I realized I wanted to represent these animals differently. Most of my books are just funny stories. The more I worked on it the more I wanted to do something for these animals I cared about and that’s when I decided to donate my royalties to an animal charity. I friend of mine introduced me to the Wildlife Conservation Network and I was very happy when they accepted my donation. They help quite a few of the animals in my book like the Okapi and the Pangolin and give every penny they raise to organizations directly involved in protecting animals.

What do you love most about the cover art and illustrations in your book?

I created my illustrations in a different style than my other books. I wanted the focus to be on the animals and I illustrated them more realistically rather than in a cartoony style. They are still a bit stylized and look friendly and approachable. I spent a lot of time drawing fur. Even digitally it take some time and brush stroke to draw that much fur.

Can you tell us about your creative process? What medium did you use? Could you share images of your work in progress?

In the early stages, when it was more of a story, I drew some of the animals in my usual way. Since I had already written books with a puffin, a coatimundi and a capybara as characters I drew similar versions of those characters in more animal type poses. I then decided to change that and draw them with more detail. Once I have a pencil drawing I inked them and then scanned the ink drawings into Photoshop. I did all of my coloring, detailing and shading in that program. Originally the animals were on solid color backgrounds. At the suggestion of my publisher I added subtle backgrounds to my illustrations.

Which book review or award has been most meaningful to you?

If I were in this for awards I would have stopped long ago. Being with a small publisher it’s easy to be overlooked. I toyed with the idea of putting a circle on the cover of “untitled” with the words PLACE CALDICOTT HERE but I liked the blankness of the final design.

The best awards come when you get a note from a parent, teacher or student about that one kid who loves your book so much that they read it over and over or it’s the first book they wanted to read in front of their class.

What are you most looking forward to at our book festival?

I love the Gaithersburg Book Festival. This is the first one I’m doing in almost three years. I love meeting the readers, I love re-connecting with other authors who I only get to see at festivals and, of course, seeing all over, the volunteers who bring this all together.

Please come to the 13th annual Gaithersburg Book Festival on May 21st to meet Timothy Young, and lots of other talented children’s authors and illustrators!

As a child Timothy Young always wondered who made the toys he played with, who wrote and illustrated the books he read and who made the cartoons he watched. He grew up to be one of the people who got to do all of them.

His career has included being the head model-maker for the Penny cartoons on Pee-Wee’s Playhouse, building Muppets for Jim Henson and sculpting the first Simpsons toys. He is the author/illustrator of 13 books including “I Hate Picture Books!,” “The Angry Little Puffin” and his newest, “P is for Puffin.”

For authors, parents, teachers & everyone who loves children’s books.

Building a culture of creativity and discovery in education

A community of readers

A Media Specialist's Guide to the Internet